As well as Islam Slimani, Leicester City need to find something for Adrien Silva.

The pair, who were both on loan at AS Monaco last year, don’t have a future under Brendan Rodgers at King Power Stadium, and new avenues are being explored to get them first-team football.

Ideally, it seems, the Premier League club would like to get rid permanently, but it’s proving more difficult than first thought.

The midfielder, for example, who is being courted by both Valencia and Sampdoria, appears to have the most interest in him, but Gazzetta dello Sport on Tuesday explain things aren’t so easy.

In fact, they go as far as saying the negotiations for the Portugal international are ‘complicated’ due to the ‘number of agents’ surrounding him. 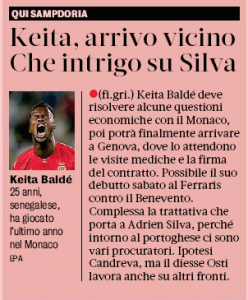 Claudio Ranieri, who is in charge at Sampdoria, appears to be willing to fish at his former clubs this summer, already close to signing Baldé Keita from Monaco, and now turning his attention to Silva.

The two arriving would go a long way to bolstering his squad, and who knows? Maybe he’ll also turn his attention to Slimani down the line?