The Italian media now expects a race between Milan and Juventus for the signing of Aaron Ramsey from Arsenal at the end of the season.

With the midfielder’s contract with the Gunners set to expire next summer, Turin newspaper Tuttosport brings a story today putting the Rossoneri as the main contenders to get him.

As already reported for a few months now, Ivan Gazidis’ presence at Milan would be a good advantage for the club, as he could use his time at Arsenal as a plus in the talks with Ramsey.

Tuttosport claims that many European clubs are interested in the midfielder, some of them English, but the only named side other than Milan is Juventus, who are said to be on the move for the Welshman as well. 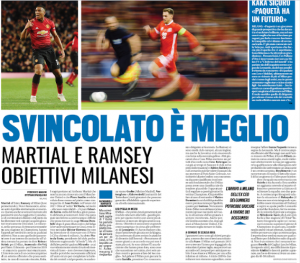 As Tuttosport usually does, they have a big story and mention many other players, but don’t bring many details in Milan’s talks for Ramsey.

Their only big claim about the situation is that the midfielder has ‘confirmed’ he’s started the process to depart from the Gunners, and that’s considered to be a big green light for Milan.