On Tuesday it was confirmed the first leg of Manchester United’s Europa League tie against Real Sociedad will now be played at Juventus’ ground in Turin.

The Spanish government are not allowing travel from the UK due to the Covid-19 situation and the risk of strains spreading. UEFA rules meant it then became La Real’s responsibility to find a new destination, and they came to an agreement with the Serie A club.

Given the lack of supporters, home advantage isn’t once what it was, but AS report that Real Sociedad’ ‘feel aggrieved’ at the prospect of having to play away from home, and then potentially playing the next match at Old Trafford.

The club ‘believes that equality is not guaranteed’ should Manchester United be able to play the second leg at their own ground. That will of course completely depend on the Covid-19 rules in place at the time of the match, which is scheduled to be played on February 25th. 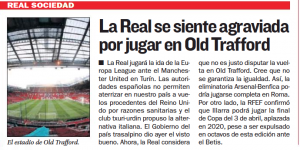 Diario Vasco, a newspaper local to Real Sociedad, report the La Liga club have come to an agreement with Juventus to use the Turin club’s training complex, where they will also stay for the match.