Taiwo Awoniyi moved to Liverpool to 2015, but the forward is yet to feature for the Reds.

A failure to obtain a work permit has forced him to go out on loan and last summer, the 21-year-old joined Gent on loan after signing a long-term deal with the Merseyside club.

The temporary deal was cut short in January and the same month, another Jupiler Pro League side Royal Excel Mouscron took him on loan until the end of the season.

In April, the Nigerian admitted a failure to obtain work permit could end his chances of playing for Liverpool.

Saturday’s edition of Belgian newspaper Het Nieuwsblad now reports the attacker’s performance during the 2018/19 season, that saw him score 14 goals and register three assists, has seen Club Brugge ‘thinking’ about signing the player.

Even though Brugge have set their sights on Awoniyi, they fear his ‘priorities are elsewhere’ and his entourage remain hopeful a transfer to Spain or Germany takes shape in the summer. 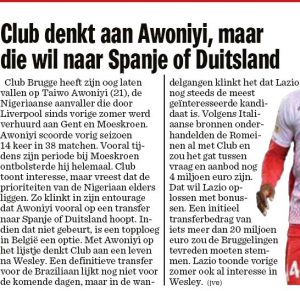 Should a move to Spain or Germany not materialise, joining a top team in Belgium is an option for Awoniyi.