Newspaper Correio da Manhã today writes there’s been ‘pressure’ for the boss to stay, as they have a gentleman’s agreement for a long-term job at the club, regardless of his contract only running until 2024.

And it turns out that when speaking of potential destinations for Conceição this summer, Tottenham Hotspur are named as one of the sides who could end up landing him.

That’s mentioned in a little paragraph Correio da Manhã writes about Jorge Mendes, in which they explain that since the manager started being represented by the super agent last year, that was one more reason for Pinto da Costa to worry. 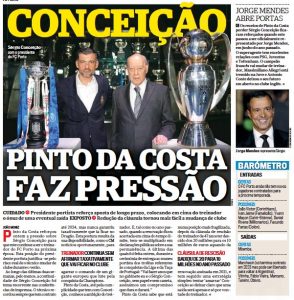 There the newspaper points out Mendes has ‘excellent relations’ with Paris Saint Germain, Juventus and Tottenham.

Speaking of Spurs, it’s said that Antonio Conte has left his ‘future open’ at the London side, and therefore they may need a replacement.

In case Tottenham do chose to pursue Conceição in a near future, they better be aware that his release clause was recently dropped from €20m to €10m.