It’s normally Juventus who are linked by the Italian media to many players about to become free agents, but now it’s time for Inter Milan to be the main subject.

Newspaper Tuttosport brings a list of stars who the Nerazzurri could sign for free next summer, and it turns out that two Tottenham Hotspur players are included.

The first of them is  Jan Vertonghen. Tuttosport says Inter Milan have been following the defender for years now, having started making reports on him back in 2016.

With the player looking to leave London, the Italians would ‘raise the pressure’ and try to get him for free next summer. 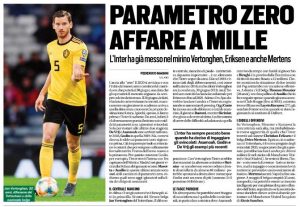 The second one is Christian Eriksen, even though Tuttosport is not so sure he’s becoming a free agent, since Manchester United or Real Madrid could drop some millions and sign him in January.

In case he stays at Tottenham until the summer, there would also be the competition from Juventus. But it’s not so clear the Old Lady would see him as a free signing, since commissions and wages would make the operation quite expensive, and that would give Inter Milan a chance to succeed.