Everton winger Bernard is now reportedly one of the targets that Roma have for the January transfer window.

It’s Italian newspaper Gazzetta Dello Sport who reports it today, claiming that the Giallorossi are looking to increase the attacking options in their squad for the rest of the season.

While they try to offload Carles Perez somewhere else, there are incoming transfers being analysed. Bernard, Stephan El Shaarawy and Roman Yaremchuk seem to be the main ones.

Regarding the Everton player, Gazzetta Dello Sport highlights the fact that his contract expires in 2022, and add that the Toffees would demand at least €12m for his sale. 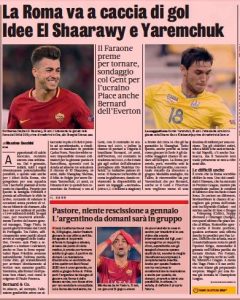 Bernard only has eight appearances for Everton this season, with two goals and one assist so far, and could look elsewhere to get more prominence.

The Brazilian has already worked under Roma manager Paulo Fonseca at Shakhtar Donetsk, so that’s certainly something that will feed this rumour in the upcoming weeks.