Alexandre Lacazette is yet to receive a new contract offer from Arsenal, despite Mikel Arteta promising he would get one.

That’s according to Gazzetta Dello Sport, who say both the Frenchman and teammate Pierre Emerick Aubameyang are both on Inter Milan’s list of possible targets.

The newspaper explains that while there will be no big splashes in the transfer market like in the past, Inter are keen to do business in January, and finding a new centre-forward is at the top of their list.

They have a hole to fill in their squad, and managing director Beppe Marotta and sporting director Piero Ausilio are already scouting the market.

Lacazette is one of those on their list as he fits the mould of player they want and is ‘on the verge’ of leaving Arsenal, where his contract expires next summer.

Aubameyang also features on that list, and he is ‘also on the verge’ although Lacazette is ahead of him in terms of preference.

Inter’s preference is to sign a striker on loan from a top team so that he can ‘relaunch himself’ at the club, but with Lacazette, there is a feeling he can be got for a ‘bargain price’ because of his contract situation. 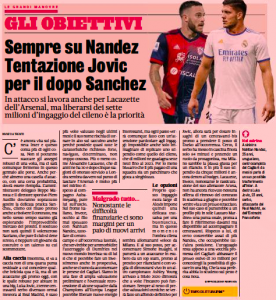 His deal with Arsenal expires in the summer and despite ‘assurances’ from Arteta that he will be offered a new deal, he has not received any offer.

Thus Arsenal will be forced to sell in January to avoid losing him on a free, something Inter can take advantage of.

There’s no mention of what they’d be willing to pay or what Arsenal will look for, just that they feel a potential bargain can be had as a result of Arteta’s so far unfulfilled promise.