Nicolas Otamendi has been linked with a return to La Liga on several occasions this summer, with the possible destination being Atletico Madrid.

However, it’s been made clear repeatedly that such a deal would be difficult for Diego Simeone’s side and that other options were likelier.

Now he’s being linked with another Spanish club… Valencia.

When the defender left there for Manchester City the exit wasn’t exactly the smoothest. Otamendi was a hero for the club’s fans and the way it all ended left a sour taste, that’s why a return would be a surprise.

Nevertheless, Monday’s edition of Marca makes it clear it’s something both the player and his former club are considering.

Otamendi would be required to take a pay cut, and Valencia would then still have the problem of trying to convince Manchester City with a transfer fee. 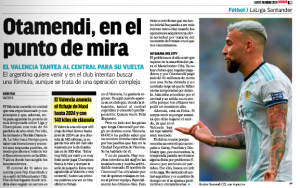 There are difficulties ahead, yet Marca explain the potential move is being discussed at Valencia.

The club want a ‘boss’ in defence, and would hope the Argentina international can be again what he was before for them.