Parma are interested in a move for Everton striker Moise Kean, but any deal would be a ‘complicated operation’ for the club, report Gazzetta dello Sport.

Kean has struggled at Goodison Park since arriving in a £30m deal from Juventus in the summer transfer window.

He has been heavily linked with a move away, with a whole host of Italian clubs thought to be keen to take him back to Serie A.

Everton have so far resisted any attempts, and the latest one they may have to bat away is from Parma.

According to Gazzetta Dello Sport, the Italian side, who are seventh in the table at present, would like to loan Kean if Carlo Ancelotti elects to ‘deprive himself’ of the forward.

Any deal would be ‘complicated’ for them, though, and would have to be ‘weighed carefully’ because it’s stated Kean’s character doesn’t fit and Parma don’t need hotheads.

However, the reality is that Everton aren’t likely to sanction any deal regardless. Ancelotti is a big fan of Kean, and the appreciation is mutual. 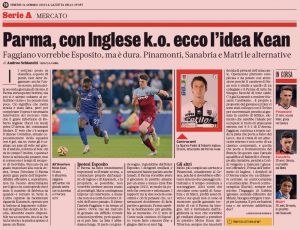 Kean has also just scored his first goal for the club and is enjoying a run of minutes in Richarlison’s absence, so his situation at Goodison is not as dire as it once was.

Everton’s stance has always been they don’t want to let him go, and with Kean now far happier, he’s not likely to push for a return either.

“May have played a small role” – Director suggests ex-Everton star...

“When the right time comes, I’ll decide to leave” – Celtic...