Sporting youngster Gonzalo Plata may only have 14 appearances for the club so far, but the Lions already have big plans for his future.

Newspaper Record has a story today saying the Lisbon side believe he can soon be worth the €60m amount related to his release clause.

They say the Premier League is his destination, while the likes of Leicester City and Watford have both been interested in the signing.

It’s just not very clear why Record is so sure Plata is moving to England, because neither the Foxes nor Hornets seem very close to his signing. 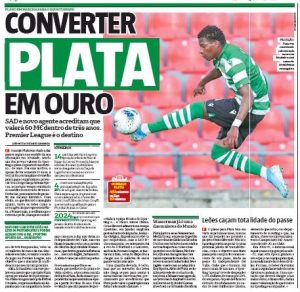 It’s claimed that in January, clubs from Spain, the Netherlands and Belgium were interested in signing Plata. More recently, it was time for English clubs to make an approach.

Leicester City and Watford both claimed they could pay €15m for the player, and Sporting believed that was not enough to even sit and talk about a transfer.

With the Lions expecting him to cost four times more, we wonder why Record are so confident that English sides will raise their bids the way Sporting want.