Bruno Lage will imminently be announced as Wolves’ new manager, with the Portuguese media saying he was set to be Nuno Espirito Santo’s successor weeks before it was announced his compatriot would be leaving the club.

Lage has now arrived in England after a complicated period making sure all the paperwork was correct to guarantee a work permit, given the new post-Brexit regulations.

The manager had been out of work since his spell in charge of Benfica, but he hadn’t been out of pocket. Having a contract with the Lisbon club until June 2024, Lage was guaranteed to receive €1m per year after tax, and Benfica continued paying this after his exit.

That cost them around €2m gross per year, so Lage going to Wolves should save the club €6m in total. However, that’s only if he’s secured €1m or more after tax per year in 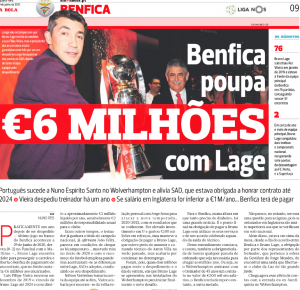 Should that not be the case, for example if Wolves pay half of the amount, then Benfica will continue to pay the difference.