Juventus may have just changed managers, but their wish-list for the transfer window shouldn’t change completely.

Tuttosport writes today that just like in the past few years, it’s the Old Lady’s board who will decide their targets and work to please their coach.

So as the club look for a replacement for Gonzalo Higuain, there are two names who continue to stand out: Napoli’s Arkadiusz Milik and Wolverhampton Wanderers’ Raúl Jiménez.

Regarding the Wolves star, Tutttosport says he has it ‘clear’ that he won’t be staying at the club for the next season, which seems to be a stance the newspaper prefer for their Turin audience. 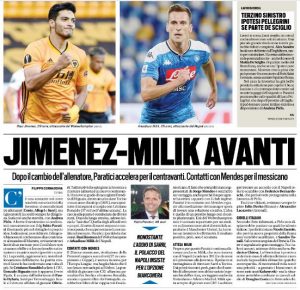 It’s said Cristiano Ronaldo would be happy to have a partnership with the South American (even though we’re pretty sure Mexico is located in North America). And since they’re both represented by Jorge Mendes, the super agent could make the move happen.

Mendes’ work would be to find a ‘creative solution’ for a deal, as Juventus’ idea is a long loan with an obligatory buying option.

But Tuttosport claims it won’t be easy to get a positive response from Wolves, especially because there are clubs such as Manchester United who are also interested in the player. That means Juve’s offer would need to be convincing.