There were multiple reports stating the 34-year-old agreed personal terms with the Serie A side and it’s now down to the Nerazzurri to find an agreement with the Red Devils for the transfer.

Speaking in his pre-match press conference on Friday, Ole Gunnar Solskjaer said: “It’s a discussion me and Ash will have if it comes up. We haven’t got too many players fit and ready so we need the ones we have.”

“He’s one of our players and our captain. There are loads of speculation, we’ve just got to handle it. Ashley’s been very professional and focused so I don’t think that’s going to change.

“He’s been very, very good for this club, and he’s been a very good captain this season, so let’s see where we are in June – and February as well.”

The United manager suggested Young will not be allowed to leave in January, even if it means they would lose him for nothing after this season.

Young has communicated to United chiefs and Solskjaer about his desire to leave Old Trafford ‘immediately’ for Inter. 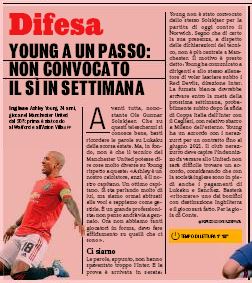 Antonio Conte’s side face Cagliari in the cup on Tuesday and after the fixture, Inter could complete Young’s transfer, so mid-week is the hope.

Young already has an agreement with Inter for an 18-month contract and the Milan club will need to compensate United, which they believe will not be difficult after signing Romelu Lukaku and Alexis Sánchez.