Having arrived at Lyon from Celtic on deadline day of the last summer transfer window, the striker has impressed after scoring 20 goals and registering four assists across all competitions.

He still has four years left on his contract with the Ligue 1 outfit.

Though Quarez stated the Red Devils have made an offer for the former Fulham man, today’s edition of L’Equipe states otherwise.

The French newspaper explains Lyon are denying having received any offer for the 22-year-old so far.

Although Dembele’s employer expect ‘some proposals’ from Ole Gunnar Solskjaer’s side and Atletico Madrid, they are adamant the frontman will not be allowed to leave the club in the summer transfer window. 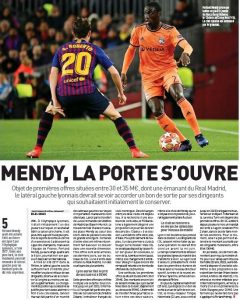 Lyon are aware that Dembele has good value in the market, but that does not mean they will make him available for sale.

With Lyon making their stance firm, looks like Manchester United and Dembele’s other suitors will have to look elsewhere.