Wednesday saw an interesting story emerge from LazioNews24 in Italy, claiming Lazio were looking at making a move for Jamaal Lascelles.

The Newcastle captain has impressed since his move from Nottingham Forest back in 2015 and has become a pillar of Rafa Benitez’s team ever since the Spaniard took charge at St James’ Park.

There wasn’t a lot of information in the article, mostly listing the players Igli Tare, Lazio’s director of football, is keeping an eye on, but Il Messaggero gives us a bit more on the Albanian’s plans.

They state the club chief is ‘especially’ looking at the former England U21 international to bolster the centre of their defence, and, to try and help get something going, is ‘attempting to reinsert Jordan Lukaku’, who came very close to a move to Newcastle United in January. 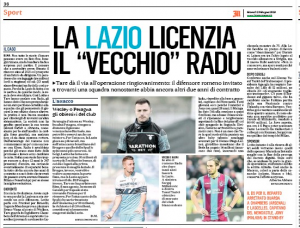 At just 25, Lascelles is still considered a young target, whose alternative could be Arsenal’s Callum Chambers.

However, it’s made clear the Magpies’ captain is near the top of the list.

It would take some convincing for Newcastle to let Lascelles go considering his importance to the team, and there’s no guarantee he’ll want to go, even if Lazio, through winning the Coppa Italia, will be playing Europa League football next season.