Loaned out to Milan for the season because he wasn’t in Ole Gunnar Solskjaer’s first-team plans, Manchester United’s Diogo Dalot has done his job adequately.

Not a regular starter under Stefano Pioli, the Portuguese defender has mostly been used for his versatility, playing on either side of the defence when there has been a need.

Most of his appearances away from Manchester United have been in the Europa League for the Serie A side, and there has been an ongoing debate in Italy as to whether making the move permanent would be worthwhile.

The problem there was that, for a long time, the belief was that Milan would have to start such negotiations afresh, with no clause reported in the deal.

That, however, has since changed, or was never reported before, as Gazzetta dello Sport now claim there is. 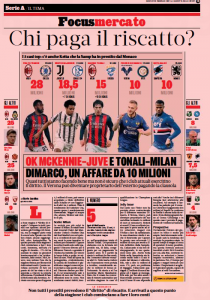 Looking at the various loans at the top Serie A clubs, the national newspaper write ‘the club with the most shots in the barrel is Milan’.

They then go onto explain ‘Dalot from Manchester United and Brahim Diaz from Real Madrid were signed in the summer with an option of €25m each’ before asking the question: ‘will it be worth the €50m investment for both? Or will the choice only fall for the Spaniard?’

This is the first we’ve seen or heard of this option to buy in the deal between the Red Devils and their Italian counterparts, so we’ll be keeping an eye on it going forward, but it would certainly make life a lot easier for the Serie A club.