Arsenal are continually being pushed out and in of the Andre Gomes transfer by the Catalan media.

One day the Gunners are edged away and the next they’re dragged back into the situation.

Barcelona are keen to sell and have been for some time. The suggested asking price has fallen this summer from €30m to €20m and even that is proving a struggle to get.

Gomes has spoken openly about feeling huge pressure at Barca and that impacting upon his football and approach to the game generally. A fresh start is very much needed but the Portuguese midfielder, who was left out of his country’s World Cup squad, needs someone to take a chance on him.

Mundo Deportivo today reports that those who remain interested includes Arsenal, Lazio and Napoli but Barcelona ‘don’t want to accept the first offer’ if it’s not good enough. 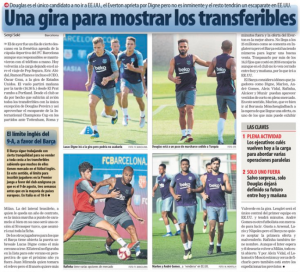 It had been hoped that Gomes would skip the club’s preseason tour to the US, and have a transfer near completion before then, but now it looks like he’ll be on the flight tomorrow afternoon.

That’s unless Arsenal or anyone else can agree a fee in the next 24 hours.