You may have seen a rather wild rumour circling over the past few days starting in the English media that West Ham’s Felipe Anderson could return to Lazio in the near future.

The Brazilian hasn’t really thrived under David Moyes, especially since the restart, making just three appearances, only one of which was a start.

That story has made its way to Italy, with Il Tempo giving it a quick once over, labelling it ‘fantasy football’, regardless of Anderson’s situation at West Ham.

He may have not managed to ‘integrate himself’ in Moyes’ system at a club struggling against the drop for most of the campaign, yet the Hammers would likely want the best part of their initial £34m investment should he leave. 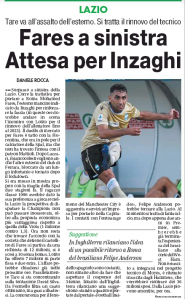 As for Lazio in all this, Il Tempo state the Serie A club are ‘dismissing it’, before adding a very subtle but also very loud ‘for now’ at the end of it.

It seems unlikely that Anderson would return, but with the Italians qualified for the Champions League next season, anything goes.

The 27-year-old made 27 appearances this season, scoring just one goal and assistive another five.