Paris Saint-Germain have reactivated the track to sign Tottenham Hotspur’s Dele Alli in the winter market, according to reports.

The 24-year-old was expected to leave Spurs last summer and the Ligue 1 winners studied the option to take him in that window, but nothing came of it.

José Mourinho hasn’t relied on the attacking midfielder and has used him sparingly this season.

L’Equipe explain PSG’s priority in the ongoing window has been to sell players, but that doesn’t stop them from making new additions.

During the internal discussions, the French champions decided to revisit the option to sign the England international.

Les Parisiens are covered in the attacking positions, but they view the former MK Dons man as a ‘market opportunity’. Therefore, PSG are ‘discussing with Tottenham’ to take their player on a loan deal.

Alli sees a move to PSG as an ‘opportunity to bounce back’, under the guidance of his former manager, Mauricio Pochettino, just months before the Euro 2020. 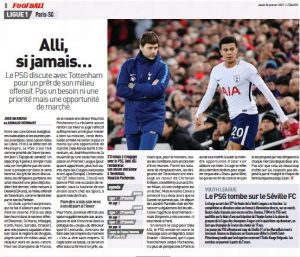 The newspaper states the Paris based club are clear they will only take Alli on a loan deal, but at the moment, ‘all the conditions are still far from being met’.

PSG’s effort to take Alli on a temporary deal also sends a message to Julian Draxler that he no longer has any prospect at the club after failing to impress Pochettino.