Barcelona are in the market looking for a backup for Jordi Alba.

Watford’s Pervis Estupiñán, who was on loan at Osasuna last season, has been discussed as one of the targets for the La Liga giants.

Four days ago, Mundo Deportivo reported the Hornets’ relegation from the Premier League has ‘opened the possibility’ for Barca to sign the 22-year-old.

The same outlet now reports the option to sign the Ecuadorian has been ‘discarded’ by the Catalan club.

It’s claimed there have been several meetings to assess the feasibility of signing the defender, but Barca have ruled him out because of the English club’s demands.

Watford are asking between €10-15m and ‘remain firm’ with their demand. However, Ronald Koeman’s side ‘don’t want to pay’ such figures to land the South American.

Mundo state the ‘economic differences’ are so huge that the ‘negotiations are totally broken’. 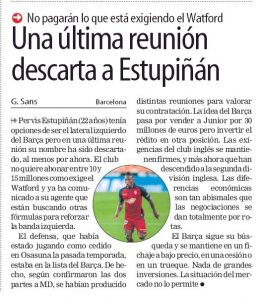 The Spanish giants are looking at other options to bolster the left-back position, and the same has been communicated to Estupiñán’s agent.

Barcelona’s intention is to sell Junior Firpo for around €30m and use those funds to strengthen other areas. Their idea is to bring in a new left-back either as a ‘low cost signing’, loan or through an exchange operation this summer.