Bayern Munich first made an attempt to sign Chelsea’s Callum Hudson-Odoi in the winter 2019 market.

Despite having made a handful of appearances for the Blues, the Bavarian club were keen on signing the winger back then.

In January 2019, Bayern sporting director Hasan Salihamidžić publicly admitted his side’s intention to bring the Chelsea player to the club.

No deal materialised and the 20-year-old is still at the west London club, with whom he just won the Champions League. He finished the 2020/21 season by making 37 appearances across all competitions.

This week’s edition of SportBild explains the Bundesliga winners will be looking to strengthen their attacking division this summer, and Salihamidžić’s ‘dream player has long been’ Hudson-Odoi. 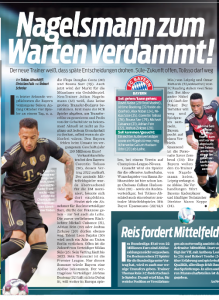 There isn’t anything to suggest Bayern are taking steps again to sign Thomas Tuchel’s man this summer.

The same report also explains Bayern defender Niklas Süle’s future is open and he dreams of making a switch to the Premier League.

The centre-back has 12 months left on his contract and has been regularly linked with a move to Chelsea.