‘Paratici flies to England and tries to make cash by sacrificing the striker’ say Tuttosport, rather dramatically, on Thursday.

Juventus sporting director Fabio Paratici is due in England this week and that’s led to various claims about what he’s actually doing. At first the claims were about Mattia Perin and a potential move to Aston Villa, and that quickly moved on to Moise Kean.

The forward has been very heavily linked with Everton in recent weeks, and other Premier League clubs have been brought in on occasion as competition. First it was Arsenal, and now Wolves take their turn.

Tuttosport say several clubs in England want the player, with Everton and Wolves ‘above all’.

Paratici is set to talk to these clubs and try to build a deal, as Juventus try to raise funds, and make space, to sign Federico Chiesa from Fiorentina. 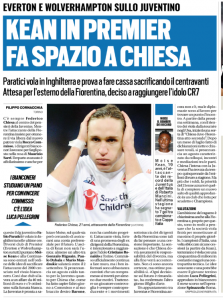 There’s been countless Kean claims in Italy this week, and it’s fair to say Wolves haven’t been a consistent part of it.

Whether their interest is genuine or not remains to be seen, and it’s just as likely they’ll slip out of the story, to be replaced by someone else, as seriously move forward.