KV Mechelen are pushing forward with plans to take Sheffield United to FIFA over the transfer of goalkeeper Michael Verrips.

Verrips joined United on deadline day of the transfer window on a free transfer, having terminated with the Belgian side when they were expelled from the Europa League for match-fixing.

His move sparked fury from Mechelen, who accused their former player of unilaterally breaking his agreement, having had a contract with them until 2021.

The club were particularly upset that Sheffield United had lodged a bid earlier for the player, only to retract it and sign him on a free hours later.

Sheffield United were less bothered by the move, though, with reports suggesting they had no concerns over how it had transpired.

That’s a case they will now have to argue to FIFA, with Mechelen majority shareholder Dieter Penninckx confirming to Sport/Foot magazine that they have started procedures with the game’s governing body.

“We think, from what is currently on the table, that all parties will discuss,” he said.

“I will not reveal all the legal details, but we feel very strongly. We must find a solution that is acceptable to everyone.

“Michael has delivered a great season, and we want to be compensated. 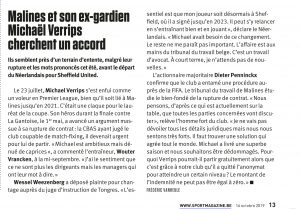 “Why could Verrips leave for free when it was thanks to our club that he left anonymity to reach a certain level?

“The amount of compensation cannot be zero.“