Seeing as Mousa Dembélé is currently in Russia with the Belgium squad taking part in the World Cup, Inter’s pursuit of him has been put on hold somewhat.

We’ve already had a few ups and downs in this saga, with claims from France that Tottenham would rather sell the midfielder to China, where they know they’ll get more money, but most of the Italian press remain convinced the 30-year-old would rather move to Italy to stay in a competitive league.

Tuttosport, however, aren’t all that convinced, explaining that the most difficult thing on Inter’s agenda in this dossier is to stop him from taking his early Chinese retirement plan.

To counter this, the Serie A side have come up with a rather ingenious plan of promising that option, after he spends two years with them in Milan. 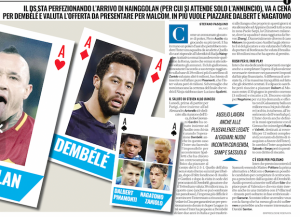 Owned by the Suning Holdings Group, Inter will, after the agreed period of time, sell Dembélé to Jiangsu Suning in the Chinese Super League, whose 100% shareholder is the Suning Appliance Group.

You can see how this has been put together…

We doubt anything will actually happen in this until Belgium’s World Cup comes to an end, though.