Eleven years. That’s how long Mamadou Sakho spent at Paris Saint-Germain before Liverpool came along and gave him the chance to try something new.

We all know how that ended, with a loan to Crystal Palace that ended up becoming a permanent transfer a few months later.

Since then, the France international has shown what he can do when fit, with the latter part being the main issue when it comes to his continuity on the pitch.

Despite his injury woes, the 30-year-old’s stock hasn’t diminished in his home country, as L’Equipe reveal on Friday talks are underway for him to move to Lyon in Ligue 1.

It’s explained those in charge of transfers at the French club have been working for the past couple of weeks ‘in the greatest discretion’ to bring Sakho back to France.

The idea of signing the former Paris Saint-Germain captain was Rudi Garcia’s, and while they have been working on other avenues too, it’s the one leading to the Crystal Palace man that has ‘thickened’ recently. 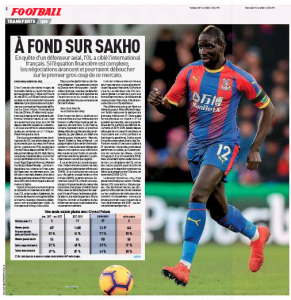 The main worry was the financial aspect of any transfer involving Sakho, and L’Equipe explain that when the idea first started out, the belief was their chances were ‘weak’, but after some consideration, their need for experience and leadership in the defence led them to push a bit further.

That’s when the ball really started rolling, around mid-May, and they are now ‘determined’ to sign the centre-back this summer.

It’s believed that with just one year left on his contract, the transfer fee wouldn’t be too excessive (below €10m) as Crystal Palace know the ‘clock is ticking’ to recuperate some of their €28m expenditure.

There is ‘optimism’ within Lyon’s ranks, but a lot of work is still needed, such as convincing the Eagles and the player.

L’Equipe write that even without Champions League football, ‘it’s difficult to imagine Sakho refusing’ to go to Lyon, and with his recovery from injury going well, it seems they would be getting him at the right time, in good health and raring to go ahead of next year’s Euros.