The midfielder had entered into his final year of contract at the Bavarian club and his decision not to sign an extension had seen him being linked with a handful of clubs across Europe.

Barcelona were also rumoured to be interested in re-signing the 29-year-old.

Last weekend, The Guardian reported ‘video calls with Jürgen Klopp had convinced and enthralled him [Thiago], much more than Barcelona’s last-minute attempts’.

Mundo Deportivo journalist Miguel Rico has looked at these claims made in the English press and then provided the La Liga club’s response to the Guardian’s report.

Rico states the Catalan club ‘deny’ making any offer for the Spain international just before he completed a move to the Merseyside club. 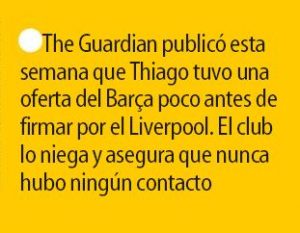 In addition to this, ‘there was never any contact’ made by Barca with the Liverpool summer signing.

Barcelona were instead chasing Liverpool midfielder Georginio Wijnaldum and their manager Ronald Koeman has also confirmed the Dutchman was on his summer transfer list.