Following reports from the English media which said Watford are interested in signing Sporting winger Jovane Cabral, the Portuguese press now comes up with their response.

Newspaper A Bola, who doesn’t seem to have any information on the Hornets’ chase for the 23-year-old, brings an article saying the Lions won’t be very ‘receptive’ to selling the player this summer.

The outlet claims that Sporting want to make between €15m and €20m for Jovane, whose contract with the Lisbon side runs until 2023.

A Bola recalls that this isn’t the first time that an English club has been interested in the player, since the likes of Leeds United, Southampton and West Ham United were all linked to him in the past. 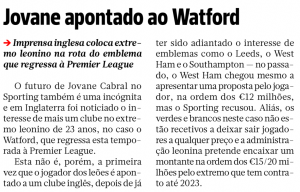 It seems West Ham were the club with the strongest chase, as they made a bid of €12m for his move, and that was turned down by Sporting.

Even though Jovane had eight goals and five assists for the Lions this season, the winger isn’t a regular starter at the club, and that could certainly help Watford in negotiations.

The Portuguese side have a good margin of negotiation, as his release clause is €60m.