Fiorentina appear to be getting a little cocky in their pursuit of Arsenal owned Lucas Torreira, at least if Sunday’s edition of La Nazione is anything to judge upon.

The newspaper, which is local to the Serie A club, reports that Fiorentina are continuing their pursuit to sign the midfielder, who is spending this season on loan at Atletico Madrid.

Having only played 424 minutes for Diego Simeone’s side this season, there’s been rumours that Torreira isn’t entirely happy with his situation. Edu Gaspar recently spoke to the media about the Uruguayan, and made it clear Arsenal will try and help him if he’s unhappy with his lot.

La Nazione report Fiorentina are set to make a ‘take it or leave it’ offer to Arsenal, and are in ‘definitive contact’ over signing the player. The offer would consist of a loan until the end of the current season, and then a compulsory purchase clause which wouldn’t exceed €11m. 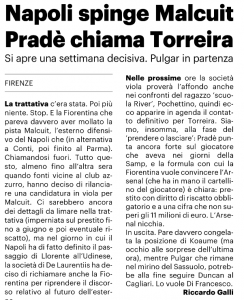 Even if Arsenal were to agree, there’s a chance Atletico would try and stop the deal happening.

Reports in Spain have indicated Simeone wants to keep the player, concerned about potential future injuries, and Covid isolations, leaving his midfield short if the Gunners man departs.