If there’s one thing the Italian newspapers can agree on on Monday, it’s that Fikayo Tomori is slowly edging towards Milan on loan.

Details remain and need to be sorted out, but the general consensus is the centre-back should be heading to Italy to get some minutes under his belt in the coming months.

The sticking point, as has been reported elsewhere, is the option to buy Milan want to add in the deal, which Chelsea see as being around €30m.

Starting with the first on that list, it’s explained Marina Granovskaia sees Tomori as a €30m player, while Ivan Gazidis and his staff ‘intend to aim for a fee of €20m, nothing more’.

The game against Cagliari on Monday evening meant talks had to be paused temporarily, with every ‘deferred to today’, when Paolo Maldini and Felipe Massara ‘have a decisive phone meeting planned with London’. 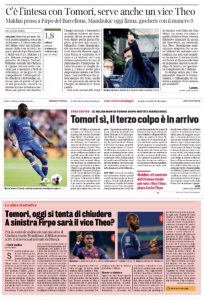 Down his end, Tomori is ‘ready for the blitz to Milan to do undergo medicals’, and the latest these talks will continue to is tomorrow, suggesting there is ‘widespread optimism’ this will go through.

This information is echoed by Corriere dello Sport, who report the deal taking Tomori from Chelsea to Milan is ‘in the homestretch’, with ‘only the last few details missing’.

As for Corriere della Seria, they feel ‘the deal could be closed soon, within the next couple of days’, since the player has already given his ‘yes’ and all that’s lacking is the agreement between the two clubs.

The €30m is ‘too much’ according to Milan, but ‘an agreement will be found’.

That’s all very positive, if you ask us.