For anyone who follows Ligue 1, few thought Raphinha would be one of the players to leave Rennes merely a year after arriving.

Signed from Sporting CP for around €24m last year, the winger scored seven goals last season and showed why the French club had gambled money on him.

However, then came Leeds United, freshly promoted to the Premier League under Marcelo Bielsa, and everything changed.

That’s what L’Equipe are reporting on Tuesday, explaining Rennes are making a loss on the Brazilian, whom they sold to the Elland Road club for €17m + €5m in bonuses.

It’s stated those in charge in Brittany ‘tried to convince the player to stay all weekend’, but decided not to ‘block him’ from leaving, such was his will to do so. 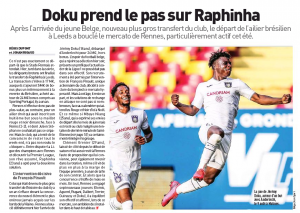 L’Equipe point out that between playing in the Champions League with Rennes or trying his luck in the Premier League under Bielsa, the 23-year-old chose the latter, as playing in England’s top-tier was his ‘dream’.

It’s a great deal from Andrea Radrizzani and co. and one that is likely to excite the Elland Road faithful over the next few months as Leeds look to continue their good start to the campaign.