Even though the signing of Diogo Dalot for Manchester United is the big transfer news in Portugal today, it’s actually a Manchester City player who makes it to the front page of newspaper Record.

The outlet comes up with an exclusive report saying that Sporting are picking the Citizens goalkeeper Joe Hart as a target for the summer window.

With Rui Patrício currently sorting his departure to Napoli, the Lisbon side are already working on a replacement for the captain, and the English goalkeeper is the ‘unanimity’ among the club board.

Sporting would be counting on the help of the Stellar Group to achieve the signing, as the club already have a good relationship with the agents company. 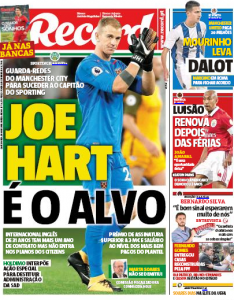 Hart is obviously not an easy signing for Sporting, but the Lions would try to make a similar deal as they had to take Jeremy Mathieu from Barcelona last summer. The players situation are basically the same, both with one year left in their contracts and not being part of their clubs’ plans.

Record claims that Hart currently earns around €7.5m gross per season at City, and would have to accept a huge pay cut to make the move. Sporting’s idea is to pay him €2m per year after tax, plus a signing bonus of €3m or €4m. The goalkeeper would sign a two-year contract.