It’s been a while since we first heard about Lazio’s interest in Leander Dendoncker, but with all the talk about Sergej Milinković-Savić potentially leaving this summer, it’s returned.

Corriere dello Sport explain those in charge at the Serie A club are looking at potential options to replace their Serbian star were he to move to pastures anew, and while there are a couple of names in Portugal that could be of interest, there’s also the Wolverhampton Wanderers man.

Their mention of Dendoncker is short and sweet, even if they still seem to think he would cost a mere €25m, but they also add the Belgium international’s staff ‘assure the interest is real’.

Corriere point out ‘no contacts have taken place yet’ from the Italians’ end, but they could in the future. 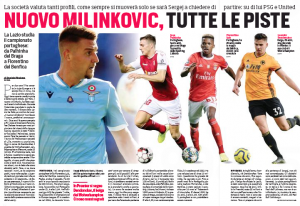 Igli Tare, the man in charge of transfers at Lazio, has been planning for the exit of Milinković-Savić for many years, but with it yet to happen, transfer targets have changed.

Dendoncker is among the new list of players, but, as we’ve said a number of times before, we doubt €25m will be enough.

Then again, if they get upwards of €80m for the Serbia international, they’ll have the money to go a bit higher than that price.

Everton one of the clubs ‘sounding out’ Barcelona over wideman –...