Wednesday’s edition of Spanish newspaper AS claims Real Sociedad could bring in a new left-back, if Kévin Rodrigues decides to leave the club in the summer transfer window.

The La Liga side have prepared an important list of targets who could replace the Portuguese defender in the squad.

Nacho Monreal of Arsenal has emerged as one of the targets for La Real.

AS are of the belief the 33-year-old’s contract with Unai Emery’s side has already expired and can sign for any club he wants on a free transfer. They say it’s ‘terminated’… they’re of course wrong.

Sociedad have already held talks with the player’s representative to know what his plans are for next season and also the ‘conditions’ needed for them to secure his services.

Last month, Arsenal announced the released players list on their official website and Monreal’s name was not included in it. 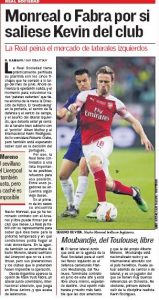 Earlier reports from England suggested the Gunners have extended the defender’s contract by one more year.

Should the Sociedad claims be based on Monreal being a free agent, then they can go straight in the transfer rumour bin.