Ever since making his first team debut in March, João Pedro has been in fine form for Fluminense, scoring nine goals in 15 appearances.

The forward turns 18 on September 26th, which is why he’s had to wait.

On June 11th, the South American side’s newly elected president Mario Bittencourt insisted he’ll review the deal agreed with the Premier League club and see if there’s any possibility of keeping Pedro at the club for a longer period.

Brazilian outlet Lance also stated there’s a clause in the contract that could allow Fluminense to cancel the contract and pay a fine of €20m to Watford. This is possibly to sell Pedro for a bigger fee later.

Catalan newspaper Sport claims Barcelona have set their sights on the teenager and his name is ‘underlined’ on the agenda of general manager Pep Segura.

Scouting reports about the youngster have been positive so far and he’s pleased the technical leaders at the Camp Nou.

Flu’s transfer get-out is covered, and that’s a way in for Barcelona.

The Spanish champions view Pedro as a player for the future, but are aware they need to act quickly if they’re to secure his services. 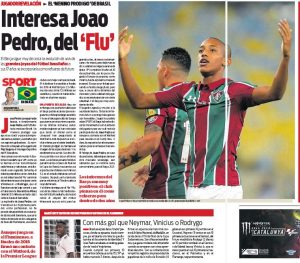 Sport explain Barca have made discreet movements with the attacker’s agent to know what’s the likelihood is of his client breaking the contract with Watford.

The response received so far has given Barcelona hope a deal still remains feasible.