Islam Slimani scored nine goals and made seven assists in 18 appearances for AS Monaco last season. He impressed for the club whilst on loan from Leicester City, despite having a fall-out with Robert Moreno.

The manager arrived at the end of December, and lasted just a few months in the role before being shown the door. Despite his exit, it’s not thought Monaco are set to make another move for Slimani, with new manager Niko Kovac having his own targets.

This means the player has to return to Leicester, but he’s not in Brendan Rodgers’ plans either. A move back to Portugal has also been discussed, yet it doesn’t appear any club is seriously working for him.

Thursday’s edition of L’Equipe reports there’s interest from Rennes, and the French club are ‘in contact’ with the player. It doesn’t state whether any talks have happened with Leicester, and there’s no idea given of a transfer fee.

Regardless of their interest, Rennes don’t seem so far down the road with an actual move for Slimani. They’re ‘studying’ the situation, which likely means they’re finding out his wages 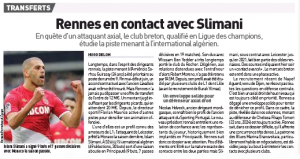 and what the Foxes would want.

With a contract ending in June 2021, this looks like an opportunity for Leicester to recoup some of what they paid for the striker.