Ndiaye joined Stoke City 12 months ago from the Istanbul club for a fee in the region of €16m. However, with Stoke City’s relegation to the Championship the player headed back to Turkey in the summer. Subsequently this could have implications for the Championship side with regards to the player remaining in Turkey beyond next summer.

According to Turkish newspaper, Galatasaray have contacted Johansen’s entourage as they look to possibly replace Ndiaye.

Johansen came very close to joining Galatasaray in 2016 when he 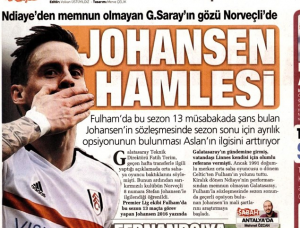 was playing for Celtic but the 27 year old decided to join Fulham, who were then in the Championship.

The midfielder will become a free agent at the end of the season and has featured in 12 Premier League games this season.