Sandro Ramírez arrived at Everton from Málaga in 2017 and after spending six months with the Toffees, he has been out on loan.

The forward spent the last campaign on loan at Real Valladolid, where he ended his two-year long goal drought in November 2019.

Despite his poor goalscoring record over recent years, he continues to attract interest from clubs in Spain and Portugal, according to Mundo Deportivo.

SD Eibar have set their sights on the 25-year-old, and they would have already made contact with the English club for the former Barcelona attacker.

Sandro is also of interest for Braga and Sporting in Portugal, who asked for him before he joined Valladolid on loan last summer. 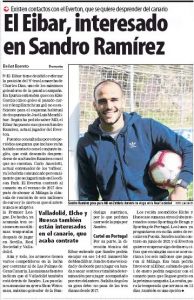 The player’s contract lasts until 2021, and the Merseyside club ‘want to get rid’ of him this summer. Carlo Ancelotti has personally informed the Spaniard he will not play for the Premier League side again.

Everton paid €6m for Sandro in 2017, and according to the report, the English club are looking to recover part of the fee they invested in his signing.