One of the first matters Luciano Spalletti asked Napoli to address when he was appointed as the club’s latest manager was the left-back position.

Perhaps the club’s weakest role in terms of depth and talent, the left hand side of the defence needs a new body (or two), which is exactly what director of football Cristiano Giuntoli is trying to do, scouring the European market for a viable option.

While Chelsea’s Emerson Palmieri is at the top of the pile, other names are being evaluated, including the surprise inclusion of Tottenham’s Ben Davies.

The Welshman, who has featured in all three of his nation’s games at the Euros so far (started the first two and came on for three minutes against Italy), was a semi-regular for Spurs until a shinbone injury cut his season short towards the beginning of April.

He recovered in time for the Euros, and now Napoli are taking a look at him, with Gazzetta dello Sport claiming that Giuntoli ‘was able to follow him during Italy-Wales’.

What he will have got from those three minutes is beyond us, but the belief is that despite having a contract tying him to Tottenham until 2024, his price is relatively affordable, costing around €15m. 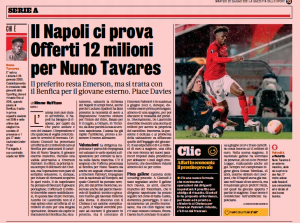 Described as an ‘interesting profile’, it’s also added there has been, at least so far, ‘no contact’ with Spurs.

He is merely an option they are considering, but it’s a lead we will be keeping an eye on going forward, especially with Fabio Paratici now at the helm, at least transfer wise, in north London.