Since the start of the week, we’ve covered claims from Italy saying the Chelsea winger Lucas Piazon on his way to Portuguese side Rio Ave.

The Italian media were pretty sure about the move, even though the Portuguese press didn’t know much, having only covered the original reports.

Now newspaper Record brings a story on the chase, and despite confirming Rio Ave’s interest in the player, they say the transfer is still far from done.

The Portuguese side are said to be ‘considering’ the arrival of Piazon. They are gathering information and waiting to see how the situation develops. 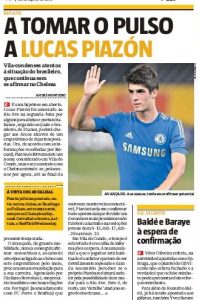 Something seen as crucial for the move to happen is that Piazon accepts a pay cut in case of a move, since Rio Ave are in no condition to afford the salary he earns at Chelsea.

Record also points out that the player’s deal with the Blues expires next summer, so that’s something that will need to be sorted before he goes out on loan.