Juan Mata’s contract at Manchester United will expire at the end of this season.

Two days ago, the 30-year-old’s father Juan Manuel Mata gave an interview to Cadena Ser in which he revealed the Red Devils have offered to extend the contract, and there’s also been proposals from other Champions League clubs.

Friday’s edition of Catalan newspaper Sport cites Cadena Ser as the source, and claims Mata Sr met the officials of Barcelona a few weeks ago to discuss about the former Chelsea star.

The La Liga winners consider the Spaniard an ‘interesting’ footballer, but signing him is not a priority for the Blaugrana in the next transfer window. 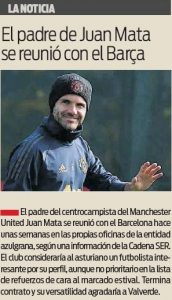 Mata is a versatile player who can play on the wings or as a No 10 and his profile would ‘please’ Barelona manager Ernesto Valverde.

Earlier this month, Mundo Deportivo also reported that Mata’s father had held talks at Barca’s offices, but they further went on to claim the Spanish champions had ‘discarded’ the idea of signing him.