Islam Slimani looked a reasonable purchase for Leicester City when the club signed him back in August 2016.

His scoring record for Sporting was excellent, and after the move there some fleeting signs he could prove a useful addition. However, he was simply never going to replace Jamie Vardy as first choice for the Foxes and that inevitably meant a lack of games and a struggle to find any kind of consistency.

A loan to Newcastle United followed, and then another to Fenerbahce, with the Algeria international returning to Leicester this summer and once again providing a problem for the club.

Friday’s edition of L’Equipe takes a look at Bordeaux’s summer transfer business and they’ve spoken to Hugo Varela, an advisor for the club’s owners. He’s made it clear there was long term interest in Slimani, but Leicester preferred to do business with AS Monaco.

The French newspaper quotes Varela as saying: “Again, we tried things but it did not 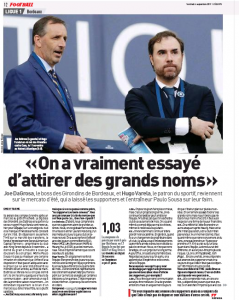 happen. Slimani, for example, was wanted since January but Leicester did not want to put it him Bordeaux. They preferred Monaco, with whom they do business, as for Adrien Silva last winter.”

Youri Tielemans has also been the subject of business between the Premier League club and Monaco, and the loan to the French principality side will have seemed a more tempting option for both player and Leicester City.