Swedish club Djurgarden have confirmed they’ve reached a transfer agreement with Bristol City for the loan of Gustav Engvall. The Swedish club’s Director of Football Bosse Andersson revealed the agreement to Aftonbladet.

Speaking to the Swedish newspaper Andersson explained: “We are in agreement with Bristol that Gustav Engvall will play for Djurgarden. He will join us shortly.”

The Swedish football season starts the first weekend of April, and the transfer window doesn’t close until the end of March, making the move possible.

Engvall joined Bristol City from Gothenburg in 2016 but for various reasons the forward has failed to make an impact. Not in Lee Johnson’s plans, it makes sense for Bristol to get 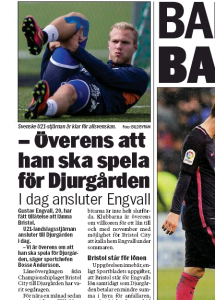 Engvall off the wage bill, hence the agreement over the player’s Ashton Gate exit.

The two clubs arranged the deal a while ago but worries over Tammy Abraham’s fitness led to Bristol City pulling out.

Djurgarden have loaned Engvall for the whole Swedish season, which runs from April until November, although Bristol City have a callback clause they can use during the summer.