Like many young players this summer, Rafael Leao could earn himself a big-money move, with the Premier League particularly interested.

Everton are one of his admirers and have been regularly linked with a transfer given their need to sign a striker.

The belief was that a €40m bid would get them the young striker and a move to Goodison Park could see him quadruple his wages.

La Voix Du Nord cover his future today and it seems that a move is certainly on the cards, with the noises coming out of Lille suggesting they’re coming to terms with the fact he will move this summer.

That’s how the newspaper presents the current situation, with manager Christophe Galtier describing Leao as a ‘prodigy’ and saying “that’s the plan” when asked about a departure.

Likewise, Lille’s president Gérard Lopez says “for wages, as soon as there are big teams, we can’t compete with them…“, further suggesting that Leao has offers on the table. 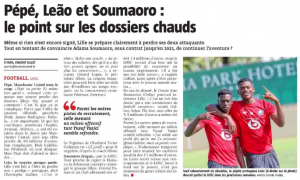 According to the newspaper, he could cost more than the €40m that’s previously been suggested, and Everton are again named as suitors, alongside Valencia.

Should the Toffees want the striker they may have to move quickly, though, as we covered a report yesterday that stated Jorge Mendes is pushing Leao towards Valencia.