There were claims at the weekend the Istanbul club just need to agree personal terms with the winger.

The Turkish giants sold Ryan Babel to Fulham earlier in this window and they will also part ways with Ricardo Quaresma in the coming days, as he returns to Portugal for family reasons.

According to Fotomac, a deal for the French winger should be sealed soon and they’re hoping to confirm the Tottenham player’s arrival before the transfer deadline on Thursday. 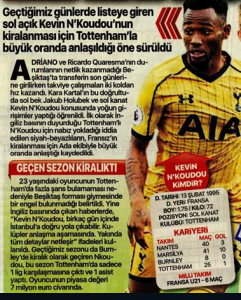 ooking to loan him until the end of the season, with an option to buy in the summer.

However, Tottenham don’t want to put a right of redemption clause in the agreement and just want a dry loan.

N’Koudou hasn’t been a regular for Mauricio Pochettino this season and is under contract with the club until 2021.

Given how short the Spurs squad is right now, just having the footballer as a number may be useful.