Real Madrid are closing in on signing Chelsea goalkeeper Thibaut Courtois, who won the Golden Glove with Belgium at the 2018 World Cup.

So far, no deal has been agreed between the Chelsea and the 13-time European champions for the ex-Atletico Madrid star, but it’s repeatedly claimed Real Madrid will be able to secure the Blues player’s services once the English club manage to bring in a replacement for him.

Courtois is expected to arrive at the Santiago Bernabeu soon as the report claims the Spanish capital club are ‘about to close’ his signing. 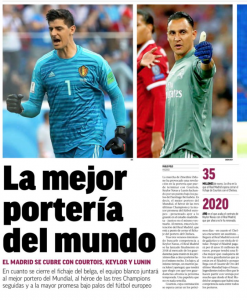 Chelsea will earn €35m from their custodian’s sale to Real Madrid, and the 26-year-old’s arrival will see Keylor Navas become the second choice keeper under Julen Lopetegui.

Real Madrid could end up with Courtois, Navas and summer signing Lunin as their three goalkeepers for the next season.