According to Turkish newspaper Fotomac, Besiktas president Ahmet Nur Cebi wants to bring Cenk Tosun back to the club, as the 29 year old could leave Everton to get regular first-team football next season.

Tosun is currently recovering from a knee injury which he picked up whilst on loan at Crystal Palace, and the Turkish international is expected to return at the start of November.

Fotomac claim Everton are also looking to loan out Tosun once again, as he’s not included in Carlo Ancelotti’s plans for next season.

A return to Besiktas could be on the cards and the club’s president Ahmet Nur Cebi will personally talk to Tosun over a return to his former club. 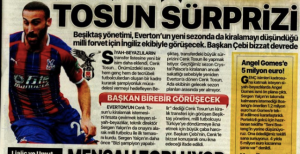 Besiktas manager Sergen Yalcin is also said to be a big fan of the player and he believes signing Tosun could significantly increase their chances of winning the league title next season.

Local rivals Fenerbahce have also been linked with the player in the past week.

Tosun’s contract with Everton will expire at the end of June 2022.