William Carvalho’s failure to leave Sporting this summer, with West Ham the club which came closest, is still a major topic for the Portuguese press. Five days after the end of the transfer window, the story still has interesting updates.

Bruno would have explained all the reasons why it wasn’t possible to find a deal with West Ham, who weren’t reaching the numbers demanded by the Portuguese side. 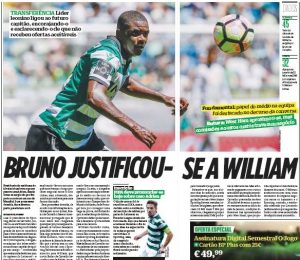 Using arguments to motivate the player, the president told the midfielder to follow Adrien Silva’s example, as the former club captain had his move to Leicester City blocked last year and is now a Leicester player, pending completion.

Despite not promising a sale, Bruno would have left ‘the doors open’ for a future move, and now William knows he will have to work hard, both in the season and in the World Cup, to get his transfer.

Question is: will West Ham still be interested next year?