Claims from the Catalan media have repeated for some time that Barcelona and Paris Saint-Germain are the two clubs chasing Ajax’s Frenkie de Jong, with Manchester City often used as a support act.

On the front page of today’s edition of Mundo Deportivo, it reads ‘De Jong moves away’ from the La Liga winners

The Netherlands international had a verbal agreement with Ernesto Valverde’s side as the latter had met the final demands asked by his agent Ali Dursun.

However, he has now distanced himself from the verbal agreement he had with the Blaugrana and is set to join Les Parisiens.

Even though the Camp Nou outfit were convinced the 21-year-old would join them over the Ligue 1 winners, the doubts of starting regularly with the Spanish champions has been a anther factor for the midfielder to change his mind.

Adrien Rabiot is set to leave PSG for Barca and will join the likes of Arthur, Ivan Rakitic, Sergio Busquets and Arturo Vidal as the midfielders at the club, which only makes it difficult for De Jong to find a place in the starting XI. 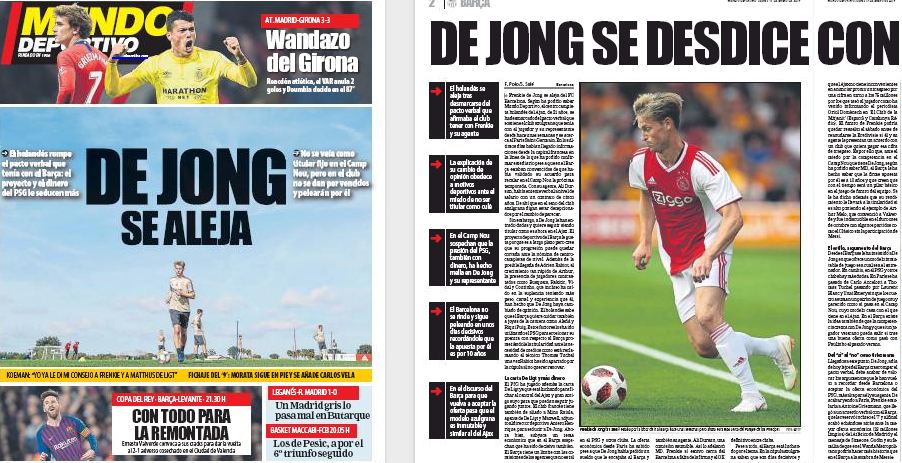 In addition to this, Thomas Tuchel’s side has also convinced the Eredivisie star that they will try to convince his club and county teammate Matthijs de Ligt to Parc des Princes.

Despite the current situation, the Catalan side won’t give up their chase for the player and will continue fighting to convince De Jong he could be a star at Barcelona.

Another small report on Mundo also mentions that PSG president Nasser Al-Khelaifi ‘takes revenge’ over Barcelona for their ongoing pursuit of Rabiot.

It’s explained that Al-Khelaifi has not supported the idea of the European giants taking the Frenchman for free, which is why the man with ‘infinite cheque book’ has decided to make an economic offer for De Jong that will not be possible for other clubs to match. 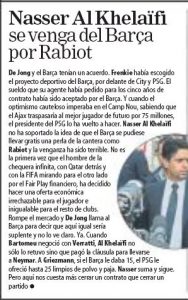 Mundo doesn’t like this idea and they mention that PSG have backing from Qatar, and FIFA have decided to look other way as they continue to breach FFP regulations.

Maybe Mundo are just bitter that PSG beat Barcelona yet again, this time for De Jong.