Vicente Iborra potentially returning to Spain in the January transfer window has been a theme in the Spanish sport media for some weeks.

It’s been clear someone has been pushing the rumours, with Sevilla, Levante and Villarreal all said to be interested.

Sevilla have been the club most linked, and Marca went a bit over the top recently explaining how the return could be the restart of a love story between player and club.

Iborra was captain when he left and couldn’t hold back the tears during his goodbye press conference.

However, some interesting quotes have come from Sevilla which would suggest the club aren’t nearly as keen as has been suggested.

Joaquín Caparrós, the club’s director of football, is quoted by Mundo Deportivo as saying: 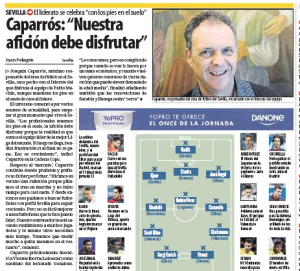 “We know him, but it’s complicated because when they leave they do it for economic reasons, and when they return they want contracts of a certain duration that can raise the average age too much.”

Iborra will turn 31 years of age in January. His Leicester City contract runs until 2021, and if he wants the same length at Sevilla, which he surely would, then that takes the midfielder to 33 years of age… and roughly a half.